Adana is in Mediterranean Turkey. 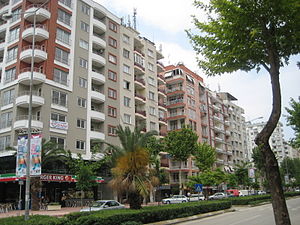 Lying a fair distance away from the Mediterranean coast, in the centre of huge Cilician Plains and on the banks of Seyhan River, Adana is the fifth most populous city in Turkey with a population of over 1.5 million. It’s not much known as a tourism destination, though, mainly when compared with its southern and western neighbours. There are sites of interest in the surrounding countryside.

Despite its location Adana is a remarkably modern and Western city. This is in large part due to the presence of a NATO base in Incirlik, which provides the city with an unusually large population of Westerners, and foreign-educated Turks. Adana is also a destination for dental tourism, owing to a large number of cheap, effective, English-speaking dentists in the area.

Take a bus to Adana

As with the rest of the country, another common way of getting here is to use the buses. They arrive here frequently from Ankara, Istanbul, Izmir, and several other cities around Turkey. Journey time from Istanbul is around twelve hours, fares starting at 50 TL. Inter-city bus companies includes Varan, Ulusoy, and Metro. Make sure you get off at the right station as most buses also stop at a station in the suburbs, about 4 km west of city centre. Getting off at the wrong station may be frustrating, but not an disaster since a local bus connects them. The bus station in city centre lies close to the Hilton hotel.

Travel by train to Adana

The best route from Istanbul or Ankara is to take the YHT fast train to Konya. From there a daily train departs around 14:30, taking six hours via Karaman to Adana; the return train leaves Adana around 07:40. So a same-day connection is possible. The line between Konya and Adana is being upgraded for YHT: there was a lengthy partial closure in 2016/17, and future engineering disruption seems likely.

The Cukurova Express overnight sleeper between Ankara and Adana has been suspended for a few years due to construction works, but it will return in December 2018. A daily train between Adana and Kayseri and a few regional trains from Elazig, Mersin and Iskenderun are also available. The lines to Aleppo and to Gaziantep thence across Syria to Mosul in Iraq, are closed indefinitely.

Adana railway station is located along Atatürk Cd, in the northern end of the central city.

Driving to Adana is an option; from Ankara, the national capital, there is highway all the way (European road number: E90) but distances are long. The motorway O-21 will connect the two cities, but it doesn’t reach any further north from Niğde for the time being, however even if there is no motorway for about half of the route from Ankara, the current highway has separated directions all along it, anyway. Once you have passed the pass of Cilician Gates (Gülek Boğazı) through the Taurus Mountains into the Cilician Plains, take O-51 eastwards.

Getting around in Adana

What to do at Adana

Adana has four malls (Optimum, Galleria, M1 and Carrefour). Optimum Outlet and M1 Shopping Centre are the largest. Optimum was opened in mid 2011 and is the newest. M1 and Optimum share many of the same stores where you can find almost all of the world class brands. (Real Hypermarket, Praktiker, Media Markt, Zara, Mudo City, Cinebonus, Tepe Home, Toys R’Us, Gap, US Polo)

Where to go next from Adana

Some of the towns and sights around Adana include: