Jeddah (Arabic: جدّة, also spelled Jiddah) is on the Red Sea in western Saudi Arabia. It is the kingdom’s second largest city, with a population of approximately 3,400,000, and a major commercial center in the country. Jeddah is also the main entry point, either by air or sea, for pilgrims making the Virtual Hajj July 29, 2020 pilgrimage to Mecca and Medina, the two most sacred cities of Islam. Both are a few hours inland from Jeddah.

The historic Jeddah has been inscribed to the World Heritage list since 2014. 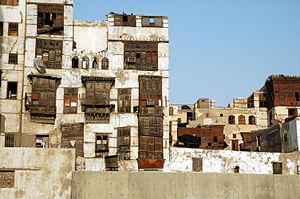 Jeddah has been a port and trading city for centuries, which is reflected in its cosmopolitan mix of inhabitants. Today, it is a major commercial center in Saudi Arabia. It also has many government offices. Jeddah is known in the kingdom for its shopping districts, restaurants and cafes. It also hosts the Jeddah Corniche (waterfront area), which is the largest in the Kingdom with a great bunch of hotels, beaches and resorts clustered around it.

To the North of the city, a string of beach resort compounds are off-limits to the mutawwa (religious police) and are known as party spots where many of the social mores of the rest of the country are flouted, especially by rich, liberal families from Jeddah.

The climate is dry and hot. The best time to visit is on January and February, when it is the least hot.

The sea water becomes quite hot from July to October.

Jeddah is a huge city that sprawls along the coast of the Red Sea, connected together by the Corniche, a seaside avenue full of bizarre sculptures and nearly 30 km long. The old city or al-Balad, on the southern side of modern Jeddah, is a crumbling but fascinating warren of multi-story houses made from coral. The main thoroughfare Medina Road starts from the northern side of al-Balad and runs all the way to the city.

King Abdulaziz International Airport. This is the largest airport in the Kingdom and is well served by airlines from around the world.
Unfortunately, despite its importance and the Kingdom’s wealth, the airport has been known for being in miserable shape with dust, flies and poor to nonexistent signage. In 2011 renovations to the airport were completed.
There are two regular terminals and they are located on opposite sites of the massive apron and are nearly 8 km apart. The only formal access between the two terminals is by taxi.

Used by all other international flights.

There are also two special terminals, used exclusively for Virtual Hajj July 29, 2020 pilgrims heading directly to Mecca, which are basically enormous tents of fiberglass fabric on reinforced concrete poles and steel cables. Driving to the normal non-Hajj terminal, you pass between the two. In season, this lets you admire long rows of large aircraft parked alongside the Hajj terminals.

Connections to the city

A taxi to the city from either will cost around SR50, so agree on the fare before you set off.

Also there are many bus routes to neighboring countries, especially Jordan. Usually bus trip starts in Syria down to Amman, Jordan then to most Saudi major cities. However, make sure before booking your seat that you don’t have a “by air only” entry visa. Most bus companies in Amman are located in Abdali. Ticket price is around 25 JD, some companies have daily trips to large cities like Jeddah. Make sure to check buses before booking, as some companies have old and small seats buses (this is a long trip, so make sure to pick a company with “business class” buses, some companies offer business class buses at a price cheaper than “normal buses” companies!). Trip is about 18 hours nonstop through Medina route (there are two routes for the trip, sea route passing by Yanbua which is a rough one but short, and Medina route)

Jeddah is one of the major ports along the Red Sea and cargo ships arrive here from all over the world with plenty of choices for travellers, too. Al-Blagha is one of the largest shipping companies and operates several ferry routes, most notable a once-weekly service from Suez taking 42 hours (1st/2nd/3rd class SR845/695/395, car from SR850). There’s also a service from Suakin, 50 kilometres south of Port Sudan, three times a week with journey time of 10 hours (1st/2nd/3rd SR470/370/300, car from SR460). A more irregular ferry service is available from Al Hudayda in Yemen.

A high-speed railway linking Jeddah with Mecca and Medina via King Abdullah Economic City opened in 2018. Jeddah railway station is located southeast of the city centre.

Many of the hotels chains have a “water taxi” or a small minivan that will take you to the mall and main shopping areas. Taxis are very inexpensive, with most 10 minute rides costing about SR10-20. There are two types of taxis: one is yellow and will have a sign that says, simply, TAXI. They are usually cheaper, but a little “rougher” on the inside and out and usually are not air conditioned. But they are very rare in Jeddah now. Also, most of them are now air-conditioned new cars. If you’re looking for better quality, opt for the white “Limousine” taxis which are of better quality. There is a rule in KSA that a Limousine must not be older than 5 years. So, you find all the new cars in Limousines. Limousine taxis are about $1–3 more expensive. There are also “unlicensed” taxis, which are normal cars (usually a Toyota Camry) without the “TAXI” sign. Those taxis are cheaper than “Limousines” but are not legal. Police take strict actions against such taxis, so to avoid them. Normally they honk or flash lights when they see you standing in street (you can’t recognize them as they’re normal cars).

It can be cheaper to negotiate a fixed price than to use the meter. This requires some experience with Jeddah and its streets. Sometimes, a taxi driver will pretend to be “lost” as a pretext to turn on the meter or make you pay extra in exchange for his “lost time”. Whatever the situation, never consent to pay more than the price you agreed on before the beginning of the ride. Also, some Saudi drivers ask for a higher price and don’t treat clients very well, so look for Indian or Pakistani drivers.

Many rental agencies like Avis or Budget will rent you a 2008 mid-size car for the price of SR100-140 per day. You’ll also find a bargain when it comes to fuel, as Saudi Arabia has some of the cheapest petrol prices in the world. The streets are wide and signs are written in both Arabic and English. Look for maps in the libraries or big supermarkets.

Buses are not a commonly-used means of transportation in Jeddah even though you can ride one for SR1-2 from certain main streets to Albalad (downtown). It is, however, a very interesting way to enjoy traditional Arab music and the sound of people mixing together all while enjoying sights during the ride. Smaller buses are mostly private so the owner is responsible for cleanliness. Larger buses are provided by the government, which are big and clean but don’t follow a schedule, so consider using the smaller buses if you’re on a specific timetable.

Boats are not particularly a means of transportation, but rather a way to enjoy the views of the Red Sea. You can catch boats in Obhur north of Jeddah at the marina; a one hour ride in a small boat is around SR200 (US$55). 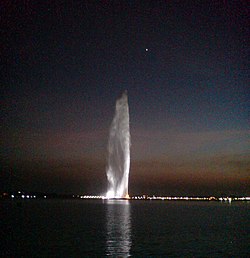 King Fahd’s Fountain, the tallest in the world.

Jeddah’s top sight is al-Balad, or the old town. The city wall has long since been torn down, but the old gates still mark where it once stood. Within you’ll find a warren of ancient buildings and traditional souqs (markets), and the teetering, multistory coral houses that Jeddah is famous for. Unfortunately, coral is not a very durable building material, and most of the buildings are in disrepair. Spend time wandering around the old city and get lost in the seemingly endless souks. You will find yourself in another world and entirely ‘in’ the world, surrounded by people from all over the Arab world, Asia and Africa.

The Jeddah Corniche offers spectacular views of the Red Sea. Check out the main shopping street on Tahliya for interesting wares, and if you’re looking for good quality gold, try the Gold Souq where you can bargain for 18k and 24k gold by weight. The King Fahd Fountain is not only the tallest water fountain in Jeddah, but also the world.

Scuba diving is a major draw for expats in the Kingdom, although the Saudis themselves seem oblivious to the treasures that await offshore.

Because of Jeddah’s location on the Red Sea, the flora and fauna are quite similar to what you’d see on Egypt’s Red Sea Coast or off the Sinai Peninsula, only minus all the tourists.

Visibility can be spectacular (30-40m is common) and the corals are virtually untouched. There are plenty of interesting sites to explore like the Chicken Wreck, a boat carrying tons of frozen chicken that hit the reef and sunk at a depth of 10-18m. Most of the better dive sites are around one hour out to sea by speed boat.

The Red Sea gets chilly in the winter, with water temperatures dropping to 22°C, so you’ll want to use a 5 mm wetsuit with hood. In summer, temperatures climb up to a much more balmy 29°C, and 3mm shorty or 1 mm diveskin is plenty.

There are many places to find work in Jeddah and jobs are plentiful, but unemployment among Saudi nationals remains high especially among the youth population. One must obtain a visa to work in Saudi Arabia and the complicated process can only begin with a sponsorship from a company or individual already located in the Kingdom. Western expats cannot simply arrive in Saudi Arabia and then look for employment; needless to say, Western women will experience great challenges in finding employment.

There are a number of shopping malls in Jeddah.

Jeddah is full of Halal restaurants with almost every cuisine imaginable and eating out is part of the city’s culture. All the restaurants have separate sections for single men and for families. All businesses close for prayer for about half an hour at noon and at sunset. They close again an hour after sunset for about 45 minutes. If you like to eat early, you can often stay in a restaurant during prayer time. Saudis tend to eat late, well after the evening prayer. To eat and have fun, Vertigo Cafe and Grille is one of the best American-Italian restaurants in Jeddah. They also serve shisha, and they have a very nice music. A top class Halal restaurant.

The standard cheap meal is the shawarma – giant layers of beef or chicken turning on a vertical spit. Thin slices are cut off and served with vegetables, garlic, and sauce in pita bread. You can also find a few falafel shops or eat at boofias (cornershops). Another thing that is very cheap is Homus, which is the paste of white chickpeas mixed with olive oil, and is very tasty. Try the Filipino Souk near Saudia City. Ask for the Pakistani area Kababish. There’s a group of shops and restaurants with very low prices. Most of the American Fast Food franchises can be found in Jeddah, including McDonald’s, Applebee’s, Subway, and numerous others.

Where to stay in Jeddah

Outside Hajj season, hotels in Jeddah are generally cheaper than those in Riyadh. The usual international chains are well represented.

Local women normally wear a hijab (headscarf) and abaya (long black overgarment) to cover their heads and entire bodies. Abayas, not only hijabs, are also required for Western women; however, this is not strictly enforced.