Jericho (Arabic أريحا Arīḥā), the “City of Palms”, is a small city within the Palestinian territories close to the northern end of Dead Sea and some 55 km (34 miles) from Jerusalem.

A relatively tranquil town, Jericho’s reputation for calm and lack of security incidents in the midst of the Israeli-Palestinian conflict has made it a natural destination for West Bank visitors. Because Jericho is a tourist-orientated town, the Palestinian Authority goes to great lengths to make sure Jericho remains safe to visit. There is a constant tourist-police presence in the city and English is spoken by many in the town.

The modern town of Jericho includes the ancient mound known as Tell es-Sultan, the accumulated remains of cities that have existed on the site for some 9,000 years – the Neolithic period. Archaeology reveals that Jericho is one of the oldest human settlements in the Middle East.

Jericho, of course, is probably best known for its Biblical associations: (song) “Joshua fought the battle of Jericho – and the walls came tumbling down!”

Due to its location nearly 400 meters below sea level, Jericho is extremely hot in the summer! 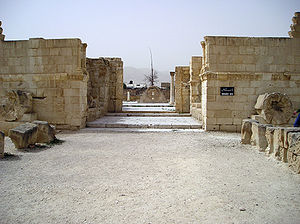 From Jerusalem, start at the HaNeviim station outside the Old City, next to Damascus Gate. From there, one must take take a bus/van to one of three Palestinian cities, and take a second bus/van to Jericho. The three cities are (in order of directness):

You can also hitchhike from the south along the Dead Sea or from Tiberias in the north. However, the Egged bus coming from there will apparently not stop before Jerusalem to let passengers off – ask when entering.

From Allenby Bridge border crossing, there is a direct bus which will deliver you to the bus station east of the center, where you will pass through Palestinian border control. From there, it is a 2 km taxi ride or (underwhelming) walk to the city center.

Taxi service in Jericho is easy to find. Make sure to agree on a price with the taxi driver before entering the taxi. Prices for taxi rides inside Jericho shouldn’t be more than ₪10. For taxi rides to sites on the outskirts of Jericho, it’s best to negotiate a fair price.

Shared taxis from/to the center are about ₪2. 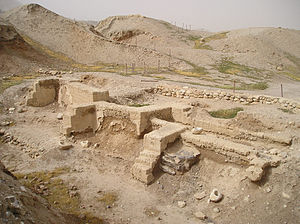 The Tree of Zacchaeus

There are Bedouins selling a variety of goods in Jericho, but the prices for them aren’t much cheaper than other places. Food, however, is significantly cheaper in Jericho.

Near the Central Square, there are many places for quick bites, especially in the direction of the Sycamore Tree or Hisham’s Palace.

It worth a visit to Qurantal mountain where Jesus fasted 40 days and 40 nights before the devil’s temptation to him, where you will find a very nice restaurant at the bottom of the mountain. The buffet is agreeable and costs around US$15 per head for lunch. Ask to sit outside for an incredible panoramic view. You will have your lunch in front of an amazing panaromic birds eye view of Jericho city, the mountains of Jordan and the Dead Sea. You can reach this restaurant by using the Cable Car of Jericho.

Greek Orthodox Monastery of the Temptation north of Jericho

Where to stay in Jericho

All major Palestinian cities are served directly by shared taxis (sherut/serviis) from here, sometimes with an interchange necessary. Travel to Israeli towns can be tricky but is possible; ask the local tourist information on the central roundabout.