Hebron (Arabic: الخليل al-Ḫalīl; Hebrew: חֶבְרוֹן Ḥevron, Ḥeḇrôn, or Ḥebron) is an ancient city in the southern West Bank. It is the traditional burial place of the Biblical patriarchs Abraham, Isaac, Jacob, and their wives. This makes it a significant religious site for the Abrahamic religions. In 2017, the old town was inscribed on the UNESCO World Heritage List.

Hebron is mentioned in the Bible as the home of Abraham, and the burial place of him and several generations of his family. In King David’s time, Hebron was briefly the capital of the Israelite state, before the capital moved to Jerusalem. Today, Hebron is holy to both Muslims and Jews due to its association with Abraham. (Christianity is also an Abrahamic religion, but Christians haven’t paid as much attention to Hebron.)

The Jewish population of Hebron was evacuated after Arabs killed nearly 70 of them in 1929. After the 1967 war, a few Jews resettled the Jewish quarter. Today, about 500 Jews live in part of the old city of Hebron under continual Israel Defense Force protection, and with a ratio of four Israeli soldiers for each Israeli settler. 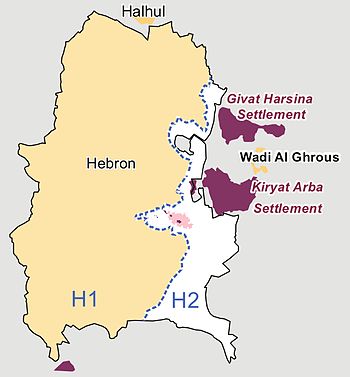 Today, the city of Hebron is home to about 500 Jews and 200,000 Palestinians. The Jewish settlement of Kiryat Arba (population 8,000) is a separate city immediately adjacent to Hebron. Hebron is divided into two sectors: H1 is entirely Palestinian and includes about 80% of the city’s residents, while H2 contains all the Jews and the remainder of the Arabs. H1 is under full Palestinian control (i.e. Area A), while H2 is under full Israel control. The Cave of the Patriarchs, the main holy site in the city, is on the border between H1 and H2.

This has been one of the tensest places between Jews and Palestinians, as in Hebron both sides here tend to be more extreme and violent than the average for their ethnic groups. Jews here have the 1929 massacre on their minds, while Palestinians have Baruch Goldstein’s 1994 massacre of praying Muslims on theirs. This is not a good place to express your opinion on the Israeli/Palestinian conflict. Even Jewish residents here have an often-hostile relationship with the Israel army, because they see it as being too accommodating to Palestinians. Unfortunately, the 2017 declaration of the Old Town as a UNESCO world heritage site has done little to ease the tensions, as the Israeli government protested its classification as an “endangered” “Palestinian” site, despite its Jewish heritage.

To the Jewish side

To the Palestinian side

Also, arriving at Kiryat Arba, you can walk directly into the Palestinian part of Hebron – consult Google Maps for the best way. However, taking the short ride with the Egged bus might be more convenient coming here the first time.

Crossing between the sides

There are at least two gates that allow passage on foot between the Palestinian and Jewish side.

There is a myth that it is impossible to access the Jewish side of Hebron on foot coming from the highway/main road. However, this is likely only true in tense times, because there are no gates and metal detectors you can be checked with. (Generally, Palestinian taxi drivers are not allowed to drive to the Jewish side.) In that case, you will need to go by taxi or bus from an Israeli town or a Jewish settlement (like Kiryat Arba). Either way, internationals can drive into the Jewish side, if your driver is not Palestinian.

You can walk into the Palestinian part of Hebron and from there to the Jewish side through either of the two gates. If you are not able to get from Kiryat Arba to the Cave of the Patriarchs on foot directly, walk via the Palestinian side and then through one of the gates coming from Be’er Sheva.

The Hebron Bus Station for servees to and from the surrounding areas, and even Bethlehem and Ramallah is on the upper floors of the Jeel-Saed shopping centre along Adel Street.

On the Palestinian side of Hebron, taxi rides within the city shouldn’t cost more than ₪10-15. For seeing sights out-of-town, it’s best to take a servees taxi at the service-taxi/bus station or negotiate a fair price with a taxi driver. Make sure to agree on a price for a taxi before getting in.

On the Jewish side of Hebron, a 10-minute walk will take you from one end to the other. 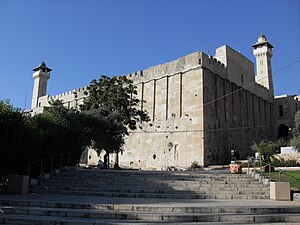 Cave of the Patriarchs

What to do in Hebron

Purchasing items in the Old City district of the city (near the Ibrahimi Mosque) Hebron’s Old City is an awesome place to get your Holy Land souvenir shopping done.

Buy some tabun (large, soft, round) bread in the Bab il Zaweya quarter and pick up a container of hummus nearby and you are set.

Falafel is one of the most famous “snacks” in Palestine in general. Hebron has many famous falafel restaurants that are always crowded because of their tasty falafel. Grab your sandwich for ₪3 and enjoy.

Hebron is famous of its traditional dish called Al-Qidrah (Al-Khaliliyah). This meal contains mainly rice and meat (chicken or lamb). It is very tasty and lovely, Al-Qidra is eaten usually on Fridays and other festivals. Since it needs time to prepare and it should be cooked in a woody oven in bakery, it is not easy to find in casual restaurant. However, it is available in restaurants like “Abu Mazen” and “Alquds” in Ras el jora. It could be expensive for local citizens. The dish for one person with drinks would cost around ₪35.

If you are a sweet lover, do not miss to get some sweets from the many sweets shops around in Hebron. Try kunafa/kenafeh (₪5 for a regular plate), Baqlawa, Harisah, Kolaj and the list can go long.

Where to stay in Hebron

It seems like there are many “guides” running around, trying to catch tourists on the basis of charity or political activism, showing you pictures of other westerners they have supposedly worked together with. They even suggest you’re Jewish if you don’t tell them your nationality, and might become pushy asking for money.

This tout-like behavior leaves some doubts whether they really stand for what they are claiming. If you just don’t want to be bothered, tell them you have been here before and not interested this time. Be firm, you have nothing to fear from these guys. Hebron definitely is a very political place, but you should decide for yourself whether to take action.

In general, be wary of unofficial guides, which mostly will try to take you from one place to the other where you will likely buy something, so they can make their share from the shop owner. They will even ruthlessly tell you that something is closed or might take too long (like the Church of the Patriarchs), which is not true, just to make sure you spend more time potentially spending money. Better to use a regular guide with an agreed and claimable schedule.

Many people are hesitant to come to Hebron, because they get told by hostel owners (e.g. in Bethlehem, for apparent reasons) that Hebron is unsafe. However, Hebron is not less safe than any other city in the West Bank during “peace times”. Also, being non-Jewish you are not a threat or target, for that matter, to/for any Palestinian, and you are likely to be greeted with the characteristic “welcome!” in the city center. However, in some of the Palestinian suburbs around the Kiryat Arba settlement, tourists are not a regular occurrence and a small minority of locals may be less friendly, especially if they believe you to be associated with the settlement.

In addition, the special situation makes it a must if you want to understand more about the Israeli conflict in Palestine.