Utrecht is a central Dutch city with a long history. With 300,000 inhabitants, it’s the fourth largest city in the Netherlands.

The history of the city goes back to 47 AD when the Roman emperor Claudius ordered his general Corbulo to build a defensive line along the river Rhine which was the northern most border of the empire. One of the strongholds (or Castella) along the river was built at a crossing in the river and was called Traiectum (which means crossingplace). In the local language this became Trecht, Uut-Trecht (lower-Trecht) and later Utrecht. On the place where once the castellum stood now stands the Domchurch built in the 13th century.

Utrecht is known as a student city with a large population of single young people. This results in a booming nightlife with many places to have a quick meal, some drinks or a dance.

The train station is at the western edge of the old city. A 5-minute walk through the Hoog Catharijne shopping center (follow signs to “Centrum”) will take you from the station to the city or the bus station.

The bus station is next to the train station. International buses depart from the western side of the train station (‘Jaarbeurszijde’), while the regional and city buses depart from separate stations on the east and west side of the train station. The regional buses are much slower than the trains. For information about the city buses, check the U-OV website, this is the company that provides public transport services in and around the city of Utrecht. Buses to the smaller towns around Utrecht are run by BBA, Arriva and Connexxion. Time schedules for train and bus can be found here.

If you are coming in by car, park your car in one of the many parking garages around the city (follow the signs) and walk from there. Electronic signs display the number of parking spaces available in any given lot as well as directions to the lot, and if the sign says Vol it means the lot is full. Expect to pay around €2.60 per hour at any of the garages in the center. Parking on the curbside is also possible, but even more expensive. Expect to pay €4 to €5 an hour in advance at the meter. Parking fines are around €70 and frequenty enforced, so make sure to get back to your car before the ticket expires. It’s best to avoid driving into central Utrecht. Instead, leave your car at the city perimeter and take a bus or tram into the center.

There are 2 transferiums (westraven & papendorp) where you can park your car for the day at a flat rate of around €4, including transit to the city center by bus or tram for up to 5 passengers. One is on the southern side of the city, very close to the A12 highway exit number 17. The Nieuwegein-Utrecht tram line has a stop at this transferium and departs 8 times an hour daytime, 4 times an hour evening and weekends. Going back you can take a tram bound for either Nieuwegein or IJsselstijn, the last one departs at about 00:30. The other transferium is near the football stadium, and connected to the city center by bus. The frequency of the bus service is comparable to that of the trams.

Utrecht is connected to two neighboring towns by a high-speed tram line. At the edge of the city, close to the A12 and A2 motorways, you will find Transferium Westraven. It’s a good idea to park your car there and to take the tram into town. The last two stop is at Utrecht Centraal Station. You will need to cross the train station and the shopping center Hoog Catherijne to get to the inner city.

€5 will allow you to park your car all day and to travel into the city with a maximum of five people. Visiting Utrecht by car doesn’t come cheaper than this. 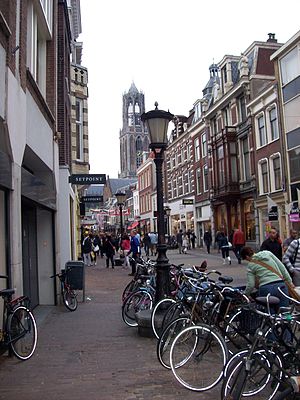 Walking or using a bike is the easiest way to travel in the city of Utrecht. To use the public transportation in the Netherlands, it is recommended to buy an OV-chipcard. You can buy these on the central bus station (lower level of Utrecht Centraal Station), at kiosks inside the central train station or at some book stores and grocery stores. The OV chipcard is valid for bus, train and tram and works like a debit card that you must first charge with an amount. Buses do take cash though.

Using a bike is the easiest way to travel in the city center if the weather is on your side. There are many bicycle shops near the train station where you can rent bikes. Alternatively, if you have an OV chipcard you can rent an OV-Fiets for €3.85 per 24 hours at one of the rail stations. Do make sure that you have good locks on your bike, as bike thefts are unfortunately quite common in the city Centre. Also it’s a good idea to make use of the free bike parking areas provided by the city council. They are usually guarded and are a safe place to park your bike.

Also recommended is to do a bike tour. There are several bike tour companies offering guided city tours. There are also cycle routes starting in the Centre of Utrecht, which you can download for free: Utrecht Forts Cycle Route.

A good alternative is taking the bus, which goes often and will take you nearly everywhere. Utrecht Centraal Station serves as the main bus hub for Utrecht as well as the main train hub for the Netherlands. Most buses run from early morning (around 06:00) until just after midnight. City center rides cost ~€2.50.

In addition, there are several so-called nightlines. These cost €5-6 and can’t be paid for using strips or OV-chipcard.

In Utrecht there is a tram line from central station to southern suburbs Nieuwegein and IJsselstein. For tourists, only the first stops will be interesting, Westplein and Graadt van Roggeweg. These are located next to the Turkish neighbourhood and the main convention Centre respectively.

Seeing Utrecht by car is not recommended. The city planners have made it as difficult as possible to navigate the city center, to try and discourage cars there. Driving around can be frustrating as the center is fraught with bus-only lanes, one-way streets, traffic lights and terribly expensive parking spaces. If you want to come by car it is recommended to park at one of the P+R (Park and Ride) places, and take a cheap shuttle bus or tram service into town. There are also several parking garages closer to the center, but they are more expensive.

It is a major canal going through the heart of the city, with shops and restaurants on both sides. This canal is unique because of its many picturesque cellars on water level. Centuries ago they were used for storage and commerce. Nowadays, many of them host fine restaurants and pubs. In the summer you can find nice terraces at the water here. 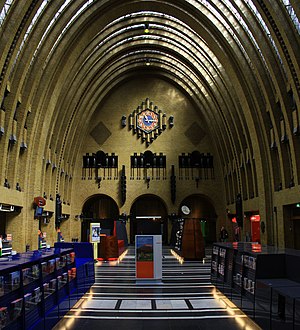 Museumkaart is accepted at the city’s museums.

The Wilhelminapark, Park Lepelenburg and the Julianapark are nice places to chill out in summer.

Watch a movie at one of many cinemas. With the exception of some animated movies (and even those are usually available in the original language as well), all movies are subtitled and not dubbed, so you should be able to enjoy all the standard Hollywood fare in the original English. As any large city, Utrecht has its share of cinemas showing Hollywood movies:

More interesting are the three independent cinemas, these specialize in art house movies and also are ideal places to get a drink or have dinner:

A ton of service positions exist in the ancient city Centre. However, they usually have low wages and require fluent Dutch.

Most shops are in the city Centre, concentrated around the Oudegracht, Vredeburg and Neude. There is also a large shopping Centre extending east from the city Centre in the direction of the Wilhelminapark. For general shop info and their openings hours you can visit openingstijden.nl   it shows an overview of the most popular shops.

There are half a dozen stores at the part of the Oudegracht (Old Canal) south of De Dom that sell board games, card games, wargames, roleplaying games, fantasy and science-fiction books and/or comics (e.g. Piet Snot, Elf Fantasy, the Joker and Neverneverland). Keep your eyes peeled; some of these stores are easy to miss.

Where to stay in Utrecht

The city’s campsite (De Berekuil, on the east side of the city) has been a huge mess for a couple years now, and it is uncertain what will happen to it in the future. There are few other campsites, though some farmers also have small scale camping on their land. For instance Camping de Boomgaard, 8 km from Utrecht city.

Utrecht as a student city is quite safe, although there are some neighbourhoods in the outskirts that you probably don’t want to visit. As always, don’t flash your wallet at markets and have a natural caution for pickpockets in the city Centre. Unfortunately, bike thefts are a common nuisance, so if you travel by bike, make sure you have good locks and park your bike at a bike parking spots. Parking your bike in the city Centre is easy as Utrecht has it own bike parking route. Parking lots for bikes are located under the Vredenburg (entrance between Zara and The Sting), the Neude (Neudeflat), Zadelstraat, under the City Hall, under the stairs at the Stationsplein West or the Jaarbeursplein.

You are unlikely to have any business in the lower-income and immigrant neighbourhoods such as Kanaleneiland and Overvecht south-west and north of the city center. While serious crime rarely takes place, they are best avoided unless you want to tempt fate. If for some reason you do end up in these neighbourhoods it is strongly advised to keep your mobile phone and camera concealed. The youth in this area is known to act aggressively if they suspect they are being filmed or photographed.