Mumbai (Marathi: मुंबई) (state tourism office), a cosmopolitan metropolis, earlier known as Bombay, is the largest city in India and the capital of the state Maharashtra. Mumbai was originally a conglomeration of seven islands on the Konkan coastline which over time were joined to form the island city of Bombay. The island was in turn joined with the neighbouring island of Salsette to form Greater Bombay. The city has an estimated metropolitan population of 21 million (2005), making it one of the world's most populous cities.

Mumbai is undoubtedly the commercial capital of India and is one of the predominant port cities in the country. Mumbai's nature as the most eclectic and cosmopolitan Indian city is symbolized in the presence of Bollywood within the city, the centre of the globally-influential Hindi film and TV industries. It is also home to India's largest slum population and the iconic Gateway of India built on the waterfront of Mumbai Harbour during the British Raj.

The name Bombay comes from Bom Bahia ("The Good bay" in Portuguese), a name given by explorer Francis Almeida. Mumbai is named after goddess Mumba devi of the Koli community.

Mumbai is a city built in successive waves of migrations. The neighbourhoods acquired their character from the communities that settled there first. These neighbourhoods are too numerous to list and there is no commonly accepted way to group these neighbourhoods into larger districts. But roughly, from the south to the north, this is how the city developed. 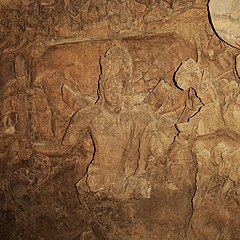 Carvings at the Elephanta Caves

Mumbai is a bustling, diverse metropolis with a flair of its own. The entrepreneurial spirit and pulsing pace of life provides a sharp contrast to much of the rest of India.

The name was officially changed from Bombay to Mumbai in 1995. Although Bombay and Mumbai are both used, people who explicitly use "Bombay" are generally non-Marathi speakers whereas "Mumbai" proponents primarily speak Marathi. In the West, Mumbai has become more commonly accepted in order to avoid controversy. The city is also fondly called आमची मुंबई ("our Mumbai").

Though the seven islands that now make up the city have a long recorded history like any other place in India, their journey to form the city of Mumbai really started in 1498, when the Portuguese took them over from the Sultan of Gujarat. They built a settlement, forts, and churches, (including the strange looking Portuguese Church that stands to this day.) They, however, could not make much of their possession and the seven islands were handed over to England in 1661 as part of the dowry of Catherine de Braganza when she married Charles II of England. He wasn't very interested in the islands either, and he leased them to the British East India Company for £10 a year in 1668. The East India Company built the docks, the trading posts, and the fort that would form the nerve centre of the city. They also started off the long process of reclaiming land and joining the islands, an activity which went on until the 1960s.

The port attracted industries and the entrepreneurial communities like the Parsis, Gujaratis, and Marwaris (from Rajasthan) migrated and set up trading companies and factories in the late 19th century. Industries attracted migrant labor from different parts of the country. The successive waves of migration shaped the character of the city and its neighborhoods.

The city that owes its existence to the efforts of the British was also the birthplace of the Indian National Congress, which played an overwhelmingly important role in the independence movement. The city whose mills were built by industrialists from across the country is the capital of Maharashtra state, which was carved on linguistic lines for Marathi speakers.

In the 80s, high labour costs and unrest forced the closure of many textile mills and the city went into a decline from which it started recovering only in the late 90s. The high population put a strain on the infrastructure. The rail and road network has been undergoing a steady improvement over the 90s, but because of the magnitude of the task, the roads seem to be perennially under construction. Mumbai has now reinvented itself as a hub for the Service industry.

In January 1993, in the wake of the destruction of the Babri Mosque in Ayodhya, a wave of riots swept the city, with over 1,000 people killed, the vast majority of whom were Muslims. Relations between the city's various ethnic groups have been tense ever since, with several terrorist outrages adding fuel to the fire.

Mumbai is the most cosmopolitan city in India. In comparison with the rest of the country, the city is quite liberal. With a regular influx of immigrants from rest of India, the citizens, popularly known as 'Mumbaikers', have shown remarkable tolerance towards other cultures, making it a true cultural melting pot. However this tolerance has sometimes bowed under external pressures. Between the 60s and 80s, there was resentment about the non-Marathi speakers taking away jobs. The 1991 and 1993 riots between Hindus and Muslims did affect this spirit; however, the city managed to recover from these, once again proudly highlighting true 'spirit of Mumbai'.

Mumbai has three main seasons — summer, monsoon, and winter (milder summer). The best time to visit is during the winter between November and February. Humidity is also less during the winter, when the climate is pleasant; the minimum temperature is 17°C and the maximum is 30-31°C. Summer is from March to May, as well as the month of October with highs in the low to mid 30s (roughly 80-90°F). It is hot and humid during this time. June to September is the monsoon season when the city is lashed by heavy rains. The city gets flooded two or three times and normal life gets disrupted during this season. Climate is humid pretty much throughout the year because the city rests on the coast.

Start this tour at 4pm by being picked up from your hotel lobby and using a local transportation to taste 8 different varieties of food at 5 of Mumbai's best Halal eateries.