Strasbourg (German: Straßburg, Alsatian: Strossburi) is the capital of the Grand-Est region of France and is most widely known for hosting a number of important European institutions. It is also famous for its beautiful historical Centre – the Grande Île – which was the first city Centre to be classified entirely as a UNESCO World Heritage List by UNESCO.

Strasbourg is one of the nine largest cities in France with nearly half a million inhabitants in a metropolitan area spanning across the river into the German city of Kehl, on the eastern bank of the Rhine.

Strasbourg is a popular tourism destination primarily thanks to the beautifully preserved and pedestrian friendly city Centre, which can be explored on foot or bicycle in a few days. Don’t forget that Strasbourg’s appeal now brings tourists to the city throughout the year, with large tour groups especially frequent during the summer months and during the annual winter market.

While it may be possible to find people who will engage in a conversation with you in German phrasebook, the lingua franca of Strasbourg (and all of Alsace) is French phrasebook. It is possible to hear German spoken on the streets, especially around the Cathedral. Alsatian (the historic Germanic language of Alsace) is a declining language, spoken mostly by the region’s older residents or in rural areas but efforts are underway to revive it.

Strasbourg has its own airport, however there are (relatively) nearby airports which have a wider range of destinations:

Due to the excellent train connection to Paris, it may make sense to fly into Paris Charles de Gaulle Airport and take the TGV from there. Air France and some of its partners offer combined tickets in an air rail alliance.

A view of the Gare de Strasbourg from outside

Strasbourg is the eastern terminus of a major high speed rail line and thus served by numerous TGV and some ICE trains, most of which continue onwards to Paris or Germany respectively. Unfortunately this has also resulted in the end of many long running sleeper trains such as the original Orient Express.

From Saarbrücken, Saar-Elsass ticket can be purchased for €35 on weekends that enables round-trip for up to 5 travellers. More details are found here.

The main train station in Strasbourg is the Gare de Strasbourg, 20 Place de la gare. . The station, impressively renovated with a new glass cocoon frontage, is located a short walk west of the town center on Place de la Gare. There are connections to the tram system and buses, with many taxis waiting outside (to the left of the station forecourt).

For details of all services, and to make reservations, contact SNCF. For regional travel, check SNCF TER Alsace who co-ordinate the efficient and well served regional train network. When planning trips east of Strasbourg into Germany or countries beyond, you could save money by comparing the fares offered by Deutsche Bahn to those of the SNCF.

The German town of Kehl just across the border got linked to the Strasbourg tram network in 2017. It is one of only a handful of places worldwide where you can just hop on an urban rail service and let it take you across an international border. Both sides being within the Schengen Area, you don’t need to take a passport or answer the question “business or pleasure” and you’ll likely not be asked by customs agents how much booze you are carrying, either (and the limits are very generous at any rate). There are of course fare inspectors, so don’t forget to get a ticket.

You can reach Strasbourg by various highways:

Driving into Strasbourg’s old city is relatively easy although there are a few streets off limits to cars. There are many large garages surrounding the old city if your hotel does not have its own parking facility. Some carparks are more expensive than other, especially for longer stays. The one at Petite France Ste Marguerite is the cheapest at €7.20/24 hour and €5.20 for each consecutive day.

Strasbourg is most easily explored on foot, and the historic city Centre can easily be explored in a day or two. To be able to cover more ground, you should consider hiring a bike or using the public transport network.

Strasbourg is ideal for cycling – the city center is flat and there are plenty of bike lanes and bike paths. You can rent bikes at:

Bikes are allowed on trams except during peak hours.

More information on cycling in Strasbourg is available on the Strasbourg website.

By bus and tram

Buses and trams in Strasbourg are operated by the Compagnie des Transports Strasbourgeois (CTS). A few dozen numbered bus lines and six tram lines (named A to F) serve the city. A single ticketing system covers both bus and tram. Tickets are sold in ‘tabacs’ (newsagents), tourist offices, CTS boutiques or from vending machines at tram stops. Tickets should be validated before use, either in the machines on tram station platforms or in the machine by the driver when you board the bus.

Prices are slightly lower (e.g. €1.70 one-way) if loaded onto a Badgéo card, CTS App or topped up on contactless ticket. CTS App works only with French Sim cards (as of Oct 2018).

If using the buses and/or trams a lot, Europass tickets are available from all automatic ticket machines for either 24 hours or seven days. The Europass Mini is valid on all local tram, bus and train services, including those that cross the border to Kehl. The full Europass ticket also covers the local transport of the Ortenau Tarifverbund in Germany including Offenburg (information in German only).

The former capitainerie of the Port on the Rhine in Strasbourg

Houses in the “Petite France” area

Petite France is the name given to the small area between the rivers, just south of the Grande Île. It is home to some of Strasbourg’s prettiest and most photogenic streets and buildings, with half timbered townhouses leaning out over the narrow cobbled streets. Petite France resembles Colmar (a city an hour south), with picturesque canal and half-timber houses. 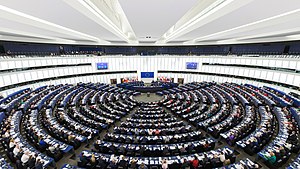 The Hemicycle of the European Parliament

Aerial view of the Rhine, showing the Passerelle des Deux Rives crossing the river from Strasbourg to the German side in Kehl

Christmas markets can be found in many places, but the most important and beautiful are place Broglie and place de la Cathédrale, although they are crowded. They are the best places to drink hot wine (vin chaud) and to eat Christmas cookies (Brädeles).

Even when there are no special events on in Strasbourg, walking around the old town is a very nice way to pass a day. And there are lots of good cafes to stop and rest in as you make your tour.

Boat tours along the Rhine offer views over both Strasbourg and neighbouring Germany. Batorama offer several river tours lasting from around 45 minutes to a few hours, costing around €10 per person. 45 min tours run around the town center and the European district. Boats can be found below Place du Marché aux Poissons.

From time to time, the city organizes a general market in vast parts of the center, where many street vendors offer various products and the shops join in with special discounts. Then, the city center on the island is partly closed for parking or driving and the trams don’t go on the rue des Francs Bourgeois. Information about regular market dates is hard to find on the net. If you manage to track down the date of this market, write it here and don’t miss it.

For cheap groceries, including local wines and beers, try one of the three outlets of NORMA, a German discount chain whose three outlets are conveniently located at the corner of rue St Michel and rue Ste Marguerite near the central train station; at 79, Grand’Rue near the center of Grand Île; and at 27, rue des Frères near the Cathedral. Open Monday to Friday 10AM-8PM, Sa 9:30AM-7PM.