Aswan is the smallest of the three major tourist cities on the Nile. Being the furthest south of the three, it has a large population of Nubian people, mostly resettled from their homeland in the area flooded by Lake Nasser. Aswan is the home of many granite quarries from which most of the obelisks seen in Luxor were sourced. Aswan was the ancient Egyptians’ gateway to Africa.

Also, Aswan is the hassle-free alternative to Luxor with an equally or even more beautiful Nile, many impressive sights nearby and a far more authentic souq than the tiny one in Luxor.

Travel by plane to Aswan

Travel by train to Aswan 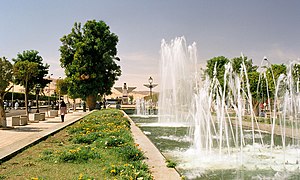 Aswan is the southern terminus of the Egyptian railway network. The line follows the Nile north to Luxor (3-4 hr), Cairo (another 10 hr) and Alexandria (another 2 hr). Train is an excellent way to travel between Aswan and Luxor as it is too short to fly, and buses are bumpy and not altogether safe; fares are LE50-100 in AC1, half that in AC2. The train ride from Cairo is obviously much slower than a flight, but comfortable and safe, and amazingly inexpensive.

From Cairo there are four types of train:

The expresses are run by Egyptian National Railways (ENR) – check timetables and prices, and make bookings, with them direct (but be sure to do so 24 hr in advance or the system might not accept!). ENR also runs the ordinary trains but these are not bookable and not shown on timetables, buy your ticket at the station. The deluxe sleepers should be booked online with Watania.

Express tickets can also be bought at the station but in 2017/18, Cairo Ramses station has often refused to sell daytime tickets to tourists, claiming they’re only allowed on the overnight train. This is bunkum and there are no similar problems buying such tickets at Giza, or northbound Aswan to Cairo – or even in simply boarding the daytime train without a ticket.

From Hurghada buses cost LE100-150 for 8-12 hr ride (513 km), buses leave Aswan at 3:30PM and 5:30PM, route operated by Upper Egypt Bus Co. Tickets are sold on the bus, but be sure to ask the price at the ticket office, because the ticket seller on the bus will often raise the price LE5 or so and pocket the excess if you are a foreigner.

Travel by boat to Aswan

Cruise ships ply between Aswan and Luxor most days. These are luxury cruise tours taking 5 or more days for a splurgy price, they’re not ferries. Various operators, shop around online for dates and prices.

A passenger ferry operated by Nile River Valley Transport Corporation sails across Lake Nasser to Wadi Halfa in Sudan once a week. Southbound it leaves Aswan noon on Sundays to arrive midday Monday; northbound it leaves Wadi Halfa 5PM Mondays to reach Aswan midday Tuesday. First class tickets, which get you a berth in a shared cabin, cost from LE385; 2nd class gets you a seat on the deck for LE230. You’ll need to have your Sudan visa sorted in advance. From Wadi Halfa, buses and a very occasional train run south to Khartoum.

Aswan is compact enough to negotiate primarily on foot.

For the sights on the river islands or on the West Bank, you must cross the river by motor boat or felluca. Be sure to pay attention to the price as operators try to overcharge tourists. The public ferry to Elephantine Island is LE5 for foreigners (LE1 for Egyptians, Nov 2018). The ferry to the West Bank is apparently also LE5 for foreigners and LE1 for locals. Felluca trips will cost LE50-80 depending on your haggling (Nov 2018).

For Philae, the High Dam, and the unfinished obelisks, you can take a taxi or a horse-drawn carriage.