Covid-19 Situation in Bosnia and Herzegovina

The Republika Srpska has a turbulent recent past, which motivates some people to be less than enthusiastic of many things Serb in Bosnia. A 1969 earthquake destroyed most of the town, and in 1993 local Serbs blew up the city’s mosques, including the famous Ferhadija, built in 1580. Ferhadija has been rebuilt.

Banja Luka has a continental climate, with harsh winters and warm summers. The warmest month of the year is July, with an average temperature of 21.3°C (70°F). The coldest month of the year is January, when temperatures average near freezing at 0.8°C (33°F). Annual precipitation for Banja Luka is about 988mm. Banja Luka has an average of 143 rainy days a year. Due to the city’s high latitude, it snows in Banja Luka almost every year as well. Strong winds come from the north and north-east.

In Banja Luka most locals call their language Serbian, although there are plenty of people who refer to the language as Bosnian, BHS, or as ‘Naš’. Anyway, those languages are virtually the same. Sometimes you’ll find (road)signs written in Cyrillic.

Take a bus to Banja Luka

There are direct bus connections from the main bus station to

Normally you would get out of those buses at Derventa but if the weather is al right and its not in the middle of the night, you could ask the bus driver to let you already out at the Novska gas station (3 km after the Novska exit) on the Zagreb-Bosanski Brod highway, approx 3 hours before Derventa. From the Novska gas station its another 15 km hitchhike to Okučani, the highway exit to Banja Luka (the bus won’t let you off there, it is off the highway, but its easy for cars to drop you off there). From Okučani its 3 km (hitch)hike to the Bosnian border. You can then cross the border on foot (or hitching) and continue the last lap of your travel by taking a bus to BL in Bosanska Gradiska (approx 8 KM). This will almost always save you several hours, and totally widens the spectrum of buses available to travel to Banja Luka.

Smiljić bus company arranges a minibus/taxi to and from the airport to the old busstation (stara autbuska stanica) in the Centre of town. Its recommended to make a reservation by email (agencija_smiljic@blic.net). The charge is 10 KM for a one-way ticket. So if your with three or more, it’s probably just as cheap to go by cab.

Travel by train to Banja Luka

The train (and bus) station is located around 2 km southeast of the Centre. Connections to: Doboj and Sarajevo (5 hr), Zagreb (5 hr) and Ploče (Croatia) and to Belgrade (Serbia). There are only a few trains passing the station each day, but tickets are a bit cheaper than the bus, and the train is generally more comfortable.

Ride-sharing too and from Banja Luka is in 2012 often done through the Trazim- nudim prevoz Facebook group.

The tourist office owns 15 rental bicycles, which are maintained by the above bike shop. Rental: 1 KM/hour, or 15 KM/day.

There are many historic things to see in the city of Banja Luka.

What to do in Banja Luka

Banja Luka is a city with the rich night life. The best place for night occasion is Kruna club at the top of merchant building in Gospodska street. Others are Opium in basement of hotel Bosna , cafe Focus in bottom of Gospodska street.

Go rafting on the parcours of the 2009 World Championships of rafting in the Canyon of the Vrbas with Buk,, buk@blic.net, Jesenjinova 1, 50 KM per person, or with the much more posh Kanjon Rafting Club in Karanovac.

Many establishments (especially hotels) accept euros (notes only). ATMs are all over the place with MasterCard, Visa and other offshoots being accepted. Credit cards such as Visa, MasterCard and Diners Club are readily accepted by larger establishments all over the country. When changing money, it is best to ask for small bills as shops often are hard-pressed for change. Travelers cheques can be readily changed at Raiffeisen and Zagrebačka Banks.

It is not compulsory to tip in Banja Luka, though a reward of about 10% for good service in restaurant is always appreciated.

You can get local, handicraft souvenirs for example at the shop of association “Duga”. All items there are made of natural materials by traditional technologies, and are decorated with ornaments from original traditional clothing from the area of Dinara. Their collection contains: ethno souvenirs, decorative products and clothing. Address: Etnoradionica “Duga”, Kralja Petra I Karađorđevića 88 (the same street as the city hall) All of the handicrafts are produced in an ethical manner and by purchasing them you will help Duga to continue providing aid to all of its beneficiaries and support to other local humanitarian projects.

Next to Kastel is also a souvenir shop, look for the big “Suvenir”-sign.

Where to eat in Banja Luka

If you like meat, you’ll love Banja Luka. Meat is a standard for any meal. However, there is still lots of interesting meals you can make do if you are a vegetarian.

Here is a list of the most popular traditional dishes:

Where to stay in Banja Luka

Possibility to pitch a tent in their huge back garden 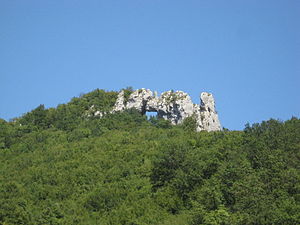 Kameni most (Камени мост) seen from the side of the Vrbas river.