Rajshahi is the capital of Rajshahi Division in Bangladesh. 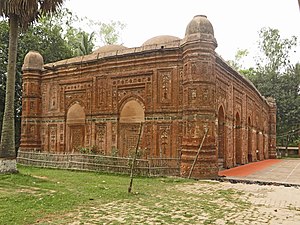 Rajshahi is the capital of Rajshahi District and Division in northwestern Bangladesh. The Rajshahi municipality was established in 1876, one of the first in Bangladesh. There is a total population of 700,000 people. One of the major rivers of the Indian subcontinent, the Padma, runs along the southern end of the city.

The city is home to many educational institutions, leading to a large student population and the nickname of “education city”. The city is in proximity to many ancient capitals of Bengal, notably ‘Lakhnoiti’ or ‘Lokhnaboti’ and ‘Pundra’. Rajshahi is famous for trade in many exotic items, including pure silk, mangoes and lychees. Attractive silk products are cheaper in Rajshahi than anywhere else in the country, with the city often referred to as the ‘silk city’. There are also a number ancient mosques, shrines and temples in and around Rajshahi. The city of Rajshahi was declared as the happiest city in the world by the World Happiness Survey in 2006.

It takes approximately 5 hours by road to reach Rajshahi from the capital, Dhaka. A number of bus services are available from Dhaka via Natore, some with air-conditioning. Bus services to other major districts are also available from the bus terminal.

Some bus services for Dhaka to Rajshahi are:

There are a number of luxurious intercity services between Dhaka and Rajshahi each day. The main ones are the Padma Express, the Silk City Express and the Dhumketue Express.

The journey from Dhaka is 261 km, taking approximately 5 hours, depending on traffic. You must cross the famous Jamuna Bridge to reach the city.

The usual forms of Bangladeshi transport are available in the city; taxis, rickshaws and auto-rickshaw CNGs. Negotiated and metered fares will usually be cheaper than in Dhaka. Like anywhere in the country, there are a lot of people and vehicles on the road, but the traffic is significantly quieter than in the capital.

Some nice Halal restaurants and fast food places are available in the city.

Where to stay in Rajshahi

Hotels rates are cheap in the city ($13.50 per night). Most accommodations are available in these hotels.