Sheki (Şəki; also Seki or Shaki) is Azerbaijan’s true travel gem, a small city off on the forested slopes of the Greater Caucasus Mountains. Rich in Islamic architecture, Silk Road history, good food, and friendly people, this is travel and leisure in the Caucasus at its finest.

Few foreigners visit Azerbaijan beyond the capital city, Baku. In so doing, they overlook a true gem in the form of Sheki. The small city of Sheki has a whole lot to offer by way of historic attractions; in particular, the Palace of the Sheki Khans (Khansarai) is a magnificent work of Islamic architecture. Its setting is stunning; it lies in the rolling, thickly forested foothills, which spread out to the south, while to the immediate north are the dramatic, snow-capped peaks of the Greater Caucasus. The possibilities for treks into the unspoilt mountain landscapes are endless, and are alone a great reason to visit the city. But more than anything, the relaxed pace of life evident in Sheki’s central market and tea houses makes the city a welcome respite from whatever cares you may have.

A relatively small city, Sheki has a population of about 63,000. It is situated in northern Azerbaijan on the southern part of the Greater Caucasus mountain range, 325 km (201 mi) from Baku and not far from the Georgian border. Sheki is located at an altitude of 500 m (1,640 ft). 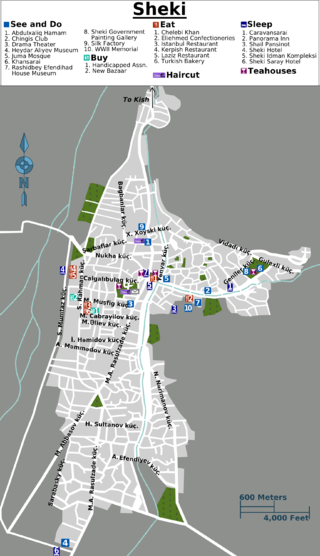 Throughout its history, Sheki was swung between independence and foreign domination. In its earlier centuries, Sheki was the seat of an Albanian kingdom, which was invaded repeatedly by the Persian, Roman, Parthian, Arab, Mongolian, and other empires. In the past millennium, Sheki fell under the influence and often the direct rule of Persia or the Shirvanshahs of Baku. Shortly after the 18th century collapse of the Safavid Empire, Sheki became the capital of the independent Sheki Khanate, during which the Khansarai was built. But Sheki’s independence did not last long; it was absorbed in the early 19th century by an expansionist Russian Empire. Due to Sheki’s rather tumultuous political history (in a tumultuous region), the majority of Sheki’s preserved historic and architectural monuments date from only the 16th-19th centuries.

Until the airport begins operating again, the fastest form of transport between Baku and Sheki is by taxi — it takes about 6 hours and 60 manat. If you share the ride with other people, it will cost around 10 manat per person.

A taxi is also a fine, if more expensive, way to get to Georgia, and you should have no trouble finding a taxi, bus, or marshrutka onward from the border at Lagodekhi to Tbilisi.

The train station has a somewhat inconvenient location of about 17 km (11 mi) from the city center. In order to reach the station you will either have to take a taxi for 4-10 manat (depending on your negotiation skills) or hop on a Baku-bound bus or minibus and ask the driver to drop you off by the railroad station, and then walk about 200 m to the station. There are night trains that run from Baku-Balakan and make a stop in Sheki. There is also a Balakan-Baku train that passes through Sheki. Passengers must produce their passports in order to buy tickets. It would be wise to purchase a ticket for the luxury carriage in advance. You can contact Mr. Xemlet at +994 50 672 5538 or Mr. Arxan at +994 55 672 5758 to make advanced reservations, or buy them online. Tickets bought online must be picket up at least one hour in advance at the train station. The basic carriage (plaskard) costs 6.73 manat for upper bed, and 7.81 for lower bed (Oct 2017), the middle class (coupe) costs around 12 manat (Oct 2017), and the luxury carriage (SV/Super Vagon) costs 19 manat (Oct 2017). Make sure that you receive all of your change from the ticket counter, as they often try to shortchange foreigners.

By bus or minibus 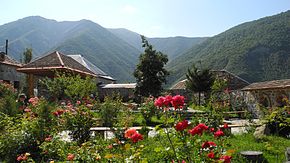 This is one of the more tedious ways to get to Sheki, taking around 6 hours, because the mountain pass used by cars and marshrutkas would be out of the question for such a large bus. Although slower, buses are more comfortable than marshrutkas, although the ones with air conditioning overdo the cold air in a big way. The fare to/from Baku is 8 manat.

Minibuses (marshrutka) run between many of the major cities to the Sheki bus station (avtovağzal), and take 6 hours to/from Baku. Use your discretion when riding the minibuses as the condition of both vehicles and drivers vary—this matters, given the exceptionally steep road, full of sharp curves, that awaits. 6 manat. 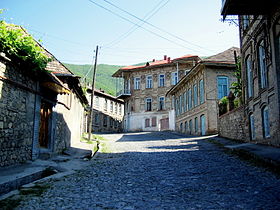 A residential street by the Caravansarai

Though a large city by the standards of Azerbaijan, it’s easy enough to get around the city center and all the main sights on foot. The sloping terrain of the city, however, may tax older visitors, but it’s also easy to get around using taxis and, for the adventurous, marshrutkas.

Taxis charge 2-6 manat and are quite convenient if you know where you want to go within the city. Addresses are quite useless in Azerbaijan as many roads have recently been renamed (since independence), so it’s better to direct the driver to a landmark you know of such as a school, hotel, or historic place. Taxi to the train station costs 10 manat.

By bus or minibus

Buses and minibuses operate from 7AM-8PM, charge 30 qapick (as of 2018), and go to many different locations throughout the city. There are 24 routes throughout the city, and most of these buses either stop in the bus terminal, the city center, or the new bazaar. Pay for the ride when getting off the bus.

While Sheki is a natural tourism destination, English is not widely spoken, so it would be wise to either bring an Azeri phrasebook and/or brush up on your Azeri, Russian, or Turkish before arriving.

The accent of Sheki is a bit quicker than that of standard Azeri and instead of the k sound it is often replaced with a kh. Also, Sheki-specific vocabulary is often used instead of common Azeri vocabulary words.

In addition to enjoying the views, and wandering the leafy streets, there are two sights in Sheki that you really cannot miss: the Khansarai and the Caravansarai. They’re both on the same road, so they’re easy enough to visit in one afternoon. If you want to draw out that afternoon, start with a lunch in the Caravansarai courtyard, then head up the hill to the Khansarai, wander around the palace, then stop in the teahouse next door to relax over a cup or two. 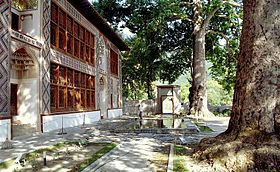 Summer palace of the Sheki Khans

Museums and galleries in Sheki

There is endless spectacular hiking to be done throughout the northern region of Azerbaijan, and Sheki proves no exception. 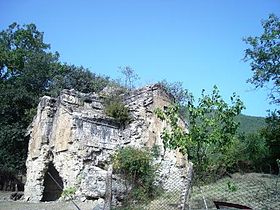 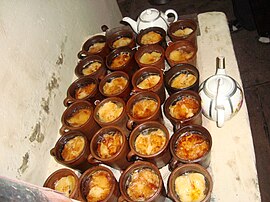 Piti ready for serving at a cafe

In addition to the several great options below, of especial interest to visitors is the excellent restaurant in the very attractive courtyard and gardens of the Caravansarai (Daily 11AM-10PM, 4-6 manat).

There is a nice outdoor tea house (çay xana) by the Khansarai, Daily 11AM-11PM, that serves tea and halva to people in their own individual nooks. There is also a tea house inside the walls of the Palace of the Sheki Khans which offers plates of the Sheki specialty halva alongside a pot of tea for 2 manat.

The only good coffee to be found (besides Nescafé or McCafe) is in the lobby of the Sheki Saray Hotel. This is where you can get your favorite espresso concoction made by Western-trained staff. The Café Mocha and Cafe Late here are some of the best hot drinks in the regions of Azerbaijan. They also offer a variety of teas.

There is a good Turkish bakery next to the New Bazaar, where you can eat local pastries. The same items can also be ordered next door at the Istanbul Restaurant, which has a nicer atmosphere. Their tastiest cake is the Snickers Cake, although it is a bit pricey (0.5 manat).

Where to stay in Sheki

You can sleep for pennies in Sheki if you stay in one of the budget options, but you get what you pay for. The lowest-grade options can have rooms with broken toilets, rude staff, etc., in addition to just being ugly. The most obvious overnight location is the Caravansarai hotel, which is reasonably priced and beautiful. Less obvious, but perhaps even more rewarding (for visitors who speak Russian or Azeri) are the home stays. 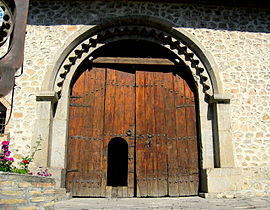 The city hospital is near the center of Sheki, right across the street from the Drama Theater.

You must speak Azeri, Russian, or Turkish to communicate your needs. It would be a good idea to memorize key phrases before coming to Azerbaijan — see the Talk section for phrasebooks.