The population of the city of Lankaran is 48,400. The population of the district was 196,156 by January 2004. Among them, 58,937 people live in the cities, 20,284 in the settlements and 116,935 in the villages. The density of population 127.5 person per 1 km2 is 40% more than republic level. The ratio of woman to men per 100 citizens is 49/51. The number of population increases by the natural growth. During the last years, the number of population has increased by 9.8 thousand person or 5.3%. The region is well endowed by labor resources. The number of working people is 82,339. It is 73.3% of the economical active parts of population. 3.2% of working people are busy in branches of industries and constructions, 73.8% in agriculture, and 23% in different fields of production and services. Except the local people, 519 refugees, and displaced people. Half of the population of Lankaran is comprised of ethnic Talish.

Lankaran is one of the oldest settlements in Azerbaijan. Facts confirmed by archeologists state that the area was inhabited from the Bronze Age. Because of the linkages between the East and the West such as the silk route, Lankaran continued to grow as a major stopover point for caravan routes. In 1742, the Talish Khanate moved its capital to Lankaran. From antiquity, people throughout Lankaran have been involved in animal husbandry, horticulture, aquaculture, and sericulture. Trades such as blacksmithing, coppersmithing, pottery, and weaving are key cultural traditions throughout Lankaran. Blacksmith, copper-smith, pottery and other trades were widely spread in Lankaran. Since the Khanate established its capitol in Lankaran, there was a great surge in trade relations between Iran, Turkey, Russia, China, India, Pakistan, and Central Asia. With the signing of the “Gulustan Treaty” in 1829 between Russia and Persia, Northern Azerbaijan was occupied by Russia. With the Russian occupation, people took the lead in the development of several new industries in Lankaran such as viniculture, ceramics, and brick making, and aided in creating trade ties between Lankaran and Russia. Through this exchange, Lankran strengthened its cultural roots, and its scientific, educational, health, and industrial bases.

Lankaran is in a very beautiful part of Azerbaijan. It lies in the South-East of the country. Lankaran is in one of the five natural geographical regions of Azerbaijan. The territory of Lankaran region borders on the Kur-Araz lowland in the North and the Caspian Sea in the South-East. It is surrounded by the Astara, Masalli and Lerik rayons. According to the relief, the territory consists mainly of plains and partly mountainous and it becomes narrow to the South. The highest point in Lankaran is 200 meters in the foothills and the lowest point in Lankaran is 28 meters below sea level by the Caspian coast. The distance between Lankaran and Baku is 268 km.

Until the airport begins operating again, the fastest between Baku and Lankaran is by taxi – it takes about 3.5 hours. Going from Baku to Lankaran costs 10 manat per seat (4 people). The “Lavangi” Avtovagzal (Auto Station) services the transport to/from Baku for taxis, buses, and marshrutka. The Lankaran Avtovagzal # is 0171-45928. 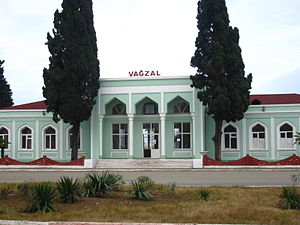 By bus or marshrutka

Taxis are quite convenient if you know where you want to go within the city. Addresses are quite useless, so it would be better to get a landmark that you know of and direct the taxi driver there. It costs 1 manat per ride in a taxi.

All Intra-City buses depart and return from the Big Bazaar in Lankaran city.

In spite of the different tourist venues in Lankaran, English is not widely spoken so it would be wise to either bring an Azeri phrase book or brush up on your Russian/Azeri/Turkish before arriving. Talish is also widely spoken in Lankaran.

The accent of Lankaran is different than standard Azeri. Often, Farsi and Talish words are interspersed in the residents’ vernacular. 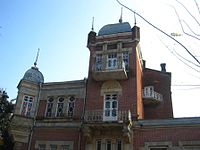 There are a few historical museums in Lankaran that are both culturally informative as well as historically significant.

Tours and excursions in Lankaran

Go on an adventure such as a tour of the “pirs” which are mystical holy places that are scattered around the southern region. Go to http://www.lankaran.org for more details.

Lankaran tea – in this city of large tea fields – is recommended along with the above mentioned cookies.

A nice place for men to drink tea, play dominoes, and catch up on the local gossip or talk about the best things to see in the area. This may be a great experience if you have language ability in Turkish, Russian, or Azerbaijani. Please look at the above mentioned cultural note under the “bars” subheading.

Cafés in Lankaran are really small restaurants. If you are looking for coffee, go to the Gala hotel in town.

Where to stay in Lankaran

There are some homestays in Lankaran city and Burjeli (next to Hirkan Milli Park). Price per person is around 10 manat/night (including meals).

The security in Lankaran is very high and nothing to worry about.

Pack a flashlight (especially in fall-spring) as the streets are not always well lit and power cuts are common.

The city hospital is located north of the city center.

You must speak in Azeri, Russian, or Turkish to communicate your needs. It would be a good idea to memorize key phrases before coming to Azerbaijan.