Ganja (Azeri: Gəncə) is a city in the Ganja Region of northwestern Azerbaijan.

Ganja is one of the oldest cities in the Caucasus, and has long been one of the most important in Azerbaijan. Having been subjected to a seemingly endless stream of invading armies, its name has changed repeatedly over the years and is very interesting architecturally. The historical name, Ganja, was restored once again upon Azerbaijan’s independence in 1991. With a population of over 300,000 it’s currently the country’s second-largest city.

Travel by train to Ganja

The Old City is best visited on foot.

There is also public bus service for 0.20 manat available.

The Old City of Ganja was developed starting in the 16th century. Living quarters (məhəllə) from those times make up vast parts of the city to this day.

Castle and Palace in 19th century 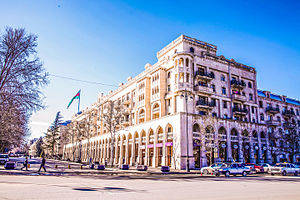 Sloboda or commonly Vtoroy Chast ( rus: “Вторая часть”), is the part of the city, which started to delevop during Russian rule (19th-20th centuries).

Ancient Ganja is the archeological site of the city. This part was destroyed during Mongol invasion in 13th century. After the war, the city of Ganja remained uninhabited till the 16th century.

What to do in Ganja

The list of top dishes of Ganjali cuisine (special recipes):

It is recommended to drink bottled water. However, there are a lot of tea houses offering tasty tea.

Where to stay in Ganja

Basic advice will help you to feel comfortable in most common situations.

Ganjalis are very hospitable people, and sometimes you may mistakenly think that it’s false hospitality. In fact, some people can overdo it in their desire to help you. It is your responsibility to stop them (and do so with plausible arguments), but be careful because even a hint of rejection will hurt them.

Ganja is the gateway to Lesser Caucasus region, where you can take few day trips from city: