Islam has been practiced in China for about 1,400 years and in Xinjiang most Muslims are either Uighur’s or Hui’s. We list here the three most famous Mosque’s in Xinjiang. 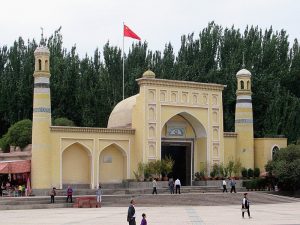 The Id Kah Mosque meaning “Place of Festivities” is a historic mosque and tourist site located in Kashgar, Xinjiang, China.

The mosque was built by Saqsiz Mirza, the elder of two sons of Amir Sayyid Ali, in ca. 1442 (although it incorporated older structures dating back to 996) to commemorate his ancestors. The mosque covers an area of around 16,000 square meters.

The mosque’s modern golden-brick structure was built in 1798, replacing the older building, and was further expanded in 1838 to its current size.

On 9 August 1933, Chinese Muslim General Ma Zhancang killed and beheaded the Uyghur leader Timur Beg, displaying his head on a spike at Id Kah mosque and in March 1934, it was reported that the Uyghur emir Abdullah Bughra was also beheaded, the head being displayed at Id Kah mosque.

In April 1934, the Chinese Muslim general Ma Zhongying gave a speech at Id Kah Mosque in Kashgar, telling the Uyghurs to be loyal to the Republic of China Kuomintang government of Nanjing.

The mosque received a renovation in 1981, and the mosque’s façade was covered with tiles between 2004 and 2005 and on 30 July 2014, the imam of the mosque at the time, Jume Tahir, was stabbed to death by extremists shortly after attending morning prayers.

The current imam of the mosque is Memet Jume. 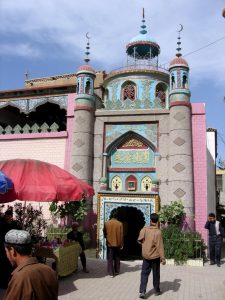 Khotan Mosque is a mosque in Khotan, Xinjiang, China. It was built in 1870 and its patron is Habibullah Khan, the ruler of the temporary Khotan Khanate.

Habibullah Khan (June 3, 1872 – February 20, 1919) was the Emir of Afghanistan from 1901 until 1919. He was the eldest son of the Emir Abdur Rahman Khan, whom he succeeded by right of primogeniture in October 1901. His grandfather was Mohammad Afzal Khan.

Habibullah was the eldest son of Emir Abdur Rahman, born in Samarkand, Uzbekistan in 1871. He had a younger brother Nasrullah, born in 1874.

Habibullah was assassinated while on a hunting trip at Kalagosh, Laghman Province on February 20, 1919. His assassination was carried out in his sleep by Shuja ud-Daula, one of the pages who slept in his tent, on orders from his younger son, Amanullah Khan. Habibullah’s brother Nasrullah Khan briefly succeeded him as Emir and held power for a week between February 21 and February 28, 1919, before being ousted and imprisoned by Amanullah Khan, Habibullah’s third son.[9] This occurred a few months before the Third Anglo-Afghan War. 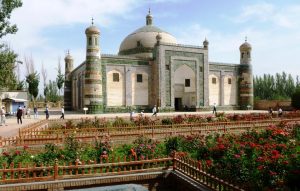 The Afāq Khoja Mausoleum or Aba Khoja Mausoleum, is a mausoleum in Xinjiang, China. The holiest local Muslim site, it is located some 5 km north-east from the centre of Kashgar, in Haohan Village Ayziret in Uyghur, which has is also known as Yaghdu. The shrine is heavily patronized by sightseers and has been designated as a tourist attraction by Chinese officials.

The mazar (mausoleum) was initially built in ca. 1640 as the tomb of Muhammad Yūsuf, a Central Asian Naqshbandi Sufi master who had come to the Altishahr region (present-day Southern Xinjiang) in the early 17th century and possibly was also active in spreading Sufism in China proper. Later, Muhammad Yūsuf’s more famous son and successor, Afāq Khoja, was buried there as well in 1694. As believed, the tiled mausoleum contains the tombs of five generations of the Afāqi family, providing resting places for 72 of its members.

The mausoleum is perhaps the finest example of Islamic architecture in Xinjiang. A large dome of 17 m is at the center surrounded by four corner minarets with stripes and arabesque floral patterns. Each of the windows of the minarets are in a different geometric pattern while the tops have turrets with an inverted lotus dome and scalloped edges. The entrance to the mausoleum is a majestic facade and a tiled iwan-niche style typical of Central Asian mosques.

The tombs are decorated with blue glazed tiles and draped in colorful silks. Inside the tomb hall is the Casket of Iparhan which supposedly carried her from Beijing.

There is a mausoleum, four prayer halls which are supported by wooden beams with muqarnas on the capitals, a lecture hall and a cemetery which is still in use by the Ugyhur population and has distinctive mud and brick tombs. A gateway also has blue glazed tiles and there is a pond in the courtyard for people to cleanse before entering.